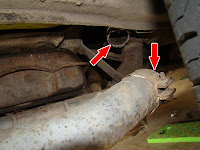 Shortly after I bought Wilson, I noticed a “pipe to nowhere” in the back, near the exhaust. It turned out to be the Heater Control Box Dump Pipe, or so I’m told. It’s used to direct heat away from the bus when the heat is turned off inside. The heat is dumped to the outside and directed toward the back so it doesn’t add to the heat already caused by the exhaust. Unfortunately, the original owner discounted the pipe. I’ll guess the hose was damaged so they just removed it instead of replacing it.

I wasn’t exactly sure what the pipe was called or the proper part number. After measuring the end pipe (about 2”), I found it was a close match to the 50mm aluminum Fresh Air Hose (028129087AS) used on the 1600 engines. I ordered a replacement from BusDepot, but found it was shorter than I expected. It was about 450mm and I thought it would be 1000mm. My fault, I didn’t confirm before ordering, so I only had enough to do one side. 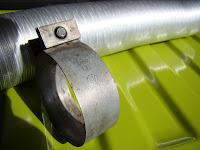 I removed the pipe and cleaned it along with the bolts and clamps. It took a while to get all of the dirt and grease off, but it really cleaned up nicely. I even found a VW logo under the dirt on one of the clamps. As I’m reassembling, I realized the end of the aluminum hose wouldn’t fit over the heater box connection. It fit perfectly over the dump pipe, so they must be slightly different sizes. After about 10 minutes of twisting and turning, I gave up and decided to cut the end of the hose. I cut two slits down the side so it would open wide enough to fit over the heat control box. It then slipped right into place and I tightened the clamps to secure it. 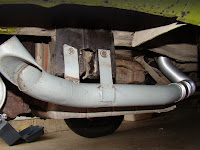 With the nuts and bolts clean, I was able to quickly reattach the dump pipe to the frame. I even cleaned the frame a bit to get rid of the dried mud. The aluminum hose is a bit too long, but not enough that I would bother cutting it down. The extra length may even come in handy if I have to remove the dump pipe to get to the valve cover. On a different note, I also noticed a couple rust spots while I was down there. There are a few small spots where rocks must have been kicked up by the rear tires and chipped the paint. Nothing serious and I’ll get that touched up later I the summer, after I cross a few more things off my “to do” list for this old Campmobile.

locoqueso:
I'm the keeper of Wilson, the 1978 VW Campmobile by Westfalia.